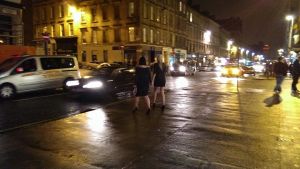 GlasgowAnni passes up chance to appear on Channel 4’s Strippers

Walking with friends on Sauchiehall Street on a Saturday night recently, we were stopped by two enthusiastic young people, one shouldering a heavy video camera, asking if they could interview us for a new Channel Four documentary about lap dancing clubs in Glasgow, Edinburgh and Edinburgh.

My friends pointed and said ‘Interview Anni!’. They were filming a number of vox pop interviews to get a feel for Glasgow city centre at night. I agreed to be interviewed, the young man took my name and telephone number and the young woman started the interview. 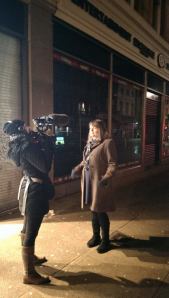 ‘We’ve been filming in lap- dancing clubs and interviewing the lap-dancers.

What do you think about those clubs?’

I told her she might regret asking me, that I work in services for women and children affected by all forms of violence against women and also as a researcher; that there were many like me who considered lap-dancing clubs to be a form of commercial sexual exploitation; that women and their bodies are not commodities to be sold for profit and that such exploitation is a function of women’s inequality… She caught my drift.

‘What about women’s choice?’

‘Do you think women are free to chose that if they want?

‘What about women’s choice?’, she asked. ‘Do you think women are free to chose that if they want?’. ‘Sure,’ I replied, ‘but how many other choices did they have before choosing to work as a lap dancer?’ I went on to say that, as with prostitution, women mostly get involved through economic necessity.

‘The young women enjoy their work”

‘The young women enjoy their work’ she replied. I said , ‘It is not for me to say what women can or cannot do, it is their decision and I just wish there were other ways they could make a living. Did you talk to the men who use the clubs too?’ I asked, and she said they had. We finished the interview and went our separate ways, they were off chasing their next interviewee, quickly swallowed up by Sauchiehall Street’s joyous Saturday night pavement crowds.

I immediately begin to have doubts about participating as I had no idea what their approach to the subject would be. I am no fan of Channel 4’s relentless output of reality shows and know that skillful editing can skew content to fit a particular narrative. Caught up in the moment, I had rushed into participation based on skant information with my friends thinking it was a great wheeze. So what was I consenting to? In truth, I had no idea.

Television reality shows offer ordinary folks a brief moment of celebrity but the unintended consequences can be risky in the longer term. The world is full of post-reality show casualties unable to dismount the carousel and further multiplying the media capital being made of them. A life lived however briefly on television or exposed on social media can end in regrets about that naïve personal disclosure, unfortunate facebook post or embarrassing selfie. These things can come back to haunt older, wiser moments.

Appearances on reality shows are fixed in time and offer a one dimensional snapshot of a life fitting only the programme makers’ agenda. However, it wasn’t my own random vox pop I was worried about but the atmosphere of the whole programme itself. I wasn’t sure I liked the smell of it. A few weeks after the interview, I withdrew my consent to take part. Part one of ‘Strippers’ aired on Channel 4 last week.

Episode 1 of ‘Strippers’ focused on the dancers and customers in Glasgow’s Diamond Dolls lap-dancing club, one of the biggest in Europe. The film itself, showing young women dancing for the male customers was commercial sexual exploitation masquerading as… I don’t know if it was masquerading as anything, a programme called ‘Strippers’ is hardly posing as serious critique… and is not even about ‘strippers’.

The film clearly showed where the power lay in the whole business. Working through its formidable ‘house mother’ and manager, herself a former dancer, the skill and beauty of the women dancers were schooled and repackaged in the club’s house style as writhing untouchable sexual avatars. The male customers, including many young men, at whom the whole sorry business is aimed, was also exploited as the ‘house mother’ openly admitted. Like automatons they are primed to spend substantial amounts of money being sexually and very publicly aroused on cue and having to pay extra if they wanted a more ‘private’ experience. One lonely divorced regular took sweeties for the ‘girls’ and referred to them as being like his ‘family’.

The commercial exploitation of sex and sexuality dehumanises everyone involved. The women are not paid for dancing but for any ‘private’ booth dances requested by the customer. The men choose who they want and pay extra. Although they could make good money, the young women competing for those lucrative opportunities spoke about disassociating and having to think of other things while they are dancing, of putting their own sexuality on hold, of having to hide their job from their family and how it changed the way they thought about themselves. If it is a legitimate career choice, as the manager implied, it is certainly having a profoundly negative effect on the young women working there.

To its credit, ‘Strippers’ let the women and men tell their own stories, offered a rare glimpse into the ambiguities going on behind those blacked-out, windowless city shop-fronts and left viewers to make up their own minds. However, by avoiding any critique it effectively normalised an aspect of our increasingly sexualised popular culture, further entrenched negative attitudes towards women and treated the men like jerks. The impact on young people, like the young dancers and customers in the programme is particularly worrying.

Recent research carried out by Zero Tolerance in Scotland found that young people are regularly faced with some toxic choices about sex and sexuality. Expectations placed on young women to conform to unrealistic beauty standards and to act sexually are high, yet they are denigrated if they go too far and get that delicate balance wrong. Similarly, young men are pressurised to conform to a heterosexual masculinity focussed on the relentless pursuit of sex, on watching and approving of pornography and sexualising women and girls. Damned if they do and damned if they don’t.

Happily, the young women dancers featured in the first programme have since chosen to give up lap-dancing and are moving in new and altogether different directions. One finally told her parents where she was working and disappeared from the second half of the programme…. thereby may hang a difficult sequel to her tale. Another packed up and went back to her nursing career in Estonia having failed to earn the money she had hoped for – glad to get away from negative effect the work was having on her personality. Another, a former champion gymnast, is making a new career and future for herself a world away from lap-dancing. With luck, the media’s memories of them all will fade.

Will those men caught getting aroused on camera by the women above their laps (not on…never on…no touching allowed) ever live it down? Will they take a tumble to themselves, stop going there and start living real lives, in real intimate relationships where there is love, affection, genuine sexual freedom and equality? That appearance on Strippers might just check that particular reality.