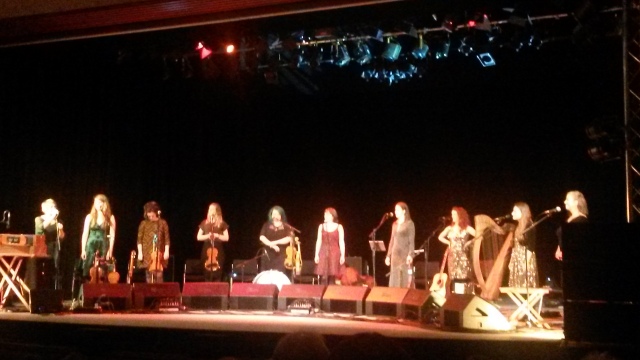 THE sight of 10 women – some of the UK’s most creative and uniquely versatile traditional musicians – walking on stage at the Mitchell Theatre on Sunday 24 January for Songs of Separation as part of Celtic Connections had quite an impact.

Fine singers and musicians all, they had the packed theatre eating out of their hands and singing from their songsheet. The fare was heavily laced with Eigg-y bread and was a tribute to that blessed isle whence they gathered in an innovative musical project in 2015 to explore the theme of separation.

Fine singers and musicians all, they had the packed theatre eating out of their hands and singing from their songsheet.

The evening, however, was far from a dolorous affair. In a clearly affectionate and sisterly endeavour, the cast of their creative nets and interpretations were wide. In their own words, Songs of Separation is about our shared experience, through songs and poems written by people who preceded us, whose words tell us much about our experience of the world today.

Their music celebrated the joy and connection between women and men, mothers and children, people and soil, land and lore, sea and sail as well as parting. Clearly enjoying themselves on what was the final night of their tour and their album launch party, they packed the evening with self-penned works, exquisite arrangements and lyricism in new and often long forgotten poems and songs which showed off the women’s artistry.

Their range and musicality offered glimpses of their muses and the breadth of their interpretation of the chosen theme. The concert was firmly anchored by the relaxed compering and joyous singing of Karine Polwarth as the concert opened with the crake and croak of the fiddle emulating that illusive bird in Echo Mocks the Corncrake, a song celebrating the bird’s stubbornness against the threat of eviction from its natural habitat.

The lush string arrangements and vocal harmonies of Poor Man’s Lamentation an English broadside ballad adapted from a poem by Uriah Smart and the powerful 10-voice a cappella choral arrangement of the Unst Boat Song, a nordic sea prayer and one of the oldest collected fragments of Shetland song given an almost hymnal treatment were mesmerising.

In a clearly affectionate and sisterly endeavour, the cast of their creative nets and interpretations were wide.

Each woman shone in her own way: Kate Young’s extraordinary vocal range seemed quite at home in a Bulgarian folk song, Jenn Butterworth’s fluid guitar playing anchored the many rich string arrangements and Jenny Hill’s mellifluous double bass spread a rich chocolate base over the evening.

Hannah James gave her accordion its head in a beautiful solo composition dedicated to fellow accordionist Tuulikki Bartosik showing off her instrument’s dynamic range and surprising delicacy with those well-known clog dancing feet making a surprise appearance as her very own rhythm section.

Eliza Carthy’s composition Cleaning the Stones, inspired by the death of a goldfish, offered as the comic song of the night had more existential depth than she let on. Eliza’s powerful voice offered a rich womanly tenor to the ensemble’s choral range.

Nowhere more effectively than in the powerful synthesis of Over the Border, a song which crossed the marches between England and Scotland, Lowland and Highland and emerged from its time of writing in 2015, post-independence referendum when the call of home and the achingly necessary trudge across borders for folk from the Middle East became yet again more pressing and tragic.

The delicate harmonies of Rowan Rheingans’ and Hannah Reid’s The Road less Travelled inspired by a Robert Frost poem were given a delicate backdrop by their banjo and plucked fiddle arrangement.

With regular sprinklings of fairy dust from Mary Macmaster’s harp and her beautifully expressive Gaelic songs, the evening never forgot its Hebridean conception on the Island of Eigg and the importance of its pierhead Tea Room and late night libations for the creative process.

The tribute paid by the women to the island as both inspiration and catalyst for Songs of Separation was loudly endorsed by the enthusiastic Eigg contingent in the audience – an island which has itself become a symbol of self-determination and the power of community.

While inspired by separation, the women conveyed the beauty and power of connection and left their audience with a warm and shared glow.