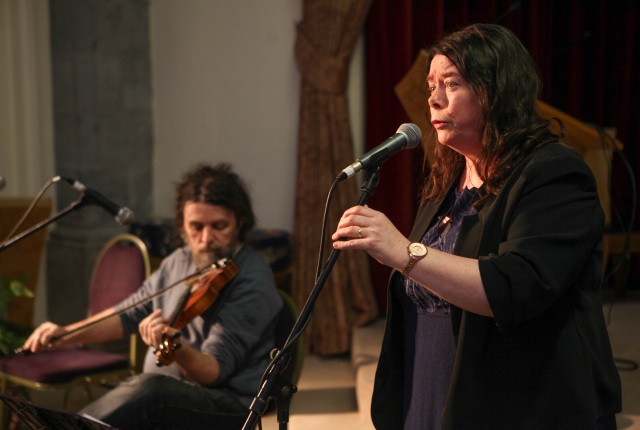 THE gulf separating the lived experience of singers Margaret Barry and Karine Polwart could hardly be wider.

Margaret, born into a family of street musicians in Cork in 1917, and Karine, a 40-something from Edinburgh, show the distance women have travelled in the world of traditional music and song.

‘She Moved Through the Fair’ by Colin Irwin and Mary McPartlan, which played at the Tron Theatre as part of Celtic Connections, gave us a funny, poignant and honestly tuneful evocation of Barry’s colourful life.

Finding herself homeless at 16, she took her chances on the road with just her bicycle and her ‘banji’, as she called it. Living rough at times and singing for bed and board, she traipsed around Ireland’s cities and country fairs singing on street corners, in pubs or wherever she could earn her keep.

Although she learned the hard way how to command an audience and compete with the clatter of street and stall, her powerfully sweet and melodic tones gave voice to Ireland’s eternal longing for itself in ballads of migration, of loves lost and found, of failed rebellion and roving in the years after the failed Easter Rising.

The self-styled ‘Queen of the Gypsies’ was strong in the face of the Irish Catholic Church’s view of independently-minded single mothers like herself, of a male-dominated culture and general prejudice against travellers – she held her own and had the last laugh.

Bumping into tradition-hunters Robin Roberts and Alan Lomax in 1951, Barry’s gifts were recognised and she went on to become the centre of the growing Irish community in London, taking up residence at sessions in the famous Bedford Arms with her new musical partner, fiddler Michael Gorman.

Caring little at all for her appearance, lack of front teeth and more for stout, Margaret went on to a colourful career touring the US. Mary McPartlan (main picture) lovingly rendered Margaret’s signature songs like the Galway Shawl, The Factory Girl, My Laggan Love, the Wild Colonial Boy and others including the exquisite title song.

Larne-born actor Ruby Campbell’s fine portrayal of Margaret through her life gave a real sense of this huge character and the size of the toss she never gave for convention or sobriety.

Polwart drew the connections and cooperation between bird, land, people, history and agriculture, weaving her tale around the love story of Roberta and Will who settled in Falla Moor in 1919. This deeply moving musical essay shared one highly creative woman’s art through reminiscence, via football, medieval medicine, peat bogs, moss and birth.

That Polwart had the funding and freedom to do what Barry could only do by force of will shows how far we have come in recognising the art women can make given half a chance.

We must thank Celtic Connections for reminding us of those uproarious foremothers like Margaret Barry who carved those first paths through the peat bog of centuries of tradition and silt and ended up on the boards of the Tron Theatre.