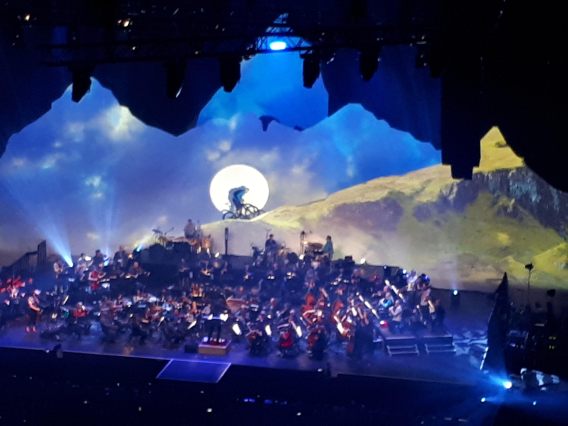 Martyn Bennett’s second studio album Bothy Culture was given the full orchestral treatment on Saturday 27 January in Glasgow’s Hydro arena – mid-point highlight of this year’s sell-out Celtic Connections 25th  Anniversary Festival.  Building on the success of Greg Lawson’s arrangement of his friend Bennett’s album Grit – Nae Regrets – premiered at Celtic Connections in 2015, this debut of ‘Bothy Culture and Beyond’ had a hard and complex act to follow.  The expectant capacity crowd – from babes in arms to mature silver backs – stacked in Glasgow’s vertiginous coliseum, mosh pit an all,  settled down for a spectacle which rocketed Bennett’s already innovative interpretations of Scots and Gaelic traditions in an altogether new direction.

Pumped up by the stomping beats and trippy lightshows of Skye’s Niteworks, their guitar riffs, steroid piping and paradiddles tanked through a traditional repertoire which successfully enfolded Julie Fowlis and The Shee. By the end of their set the event’s transition from ceilidh to house was complete. The 80+ strong Grit Orchestra et al took it from there with the velocity needed to continue the wholesale reboot of the audience’s Celtic Connectors which the evening was shaping up to be.

The son of Margaret Bennett the celebrated Scottish folklorist and singer, Martyn, who died of lymphoma aged 33 years in 2005, said of his work in 2003,

I’m not trying to change the face of Scottish music. It’ll change on its own in ways that I won’t ever know how in the future.

Bennett’s modest yet prophetic words may have been ringing in Musical Director Greg Lawson’s ear as he set about arranging his friend’s second studio album for GRIT Orchestra, trapeze, aerialist, spoken word, landscape, boat and trail bike.  The rationale behind this strange mega mash-up became clearer as the night went on but as sheer circus it seemed to work from the off.  The crowd were delighted by biking acrobat Danny MacAskill’s staged recreation of his Youtube smashhit ride on Skye in ‘The Ridge’ –  the cardboard rocks, lightshow loch, Cuillin backdrop, mountain trails and all managed somehow to stay this side of naff. Despite the scale and strangeness, the sweet, strong tones of Fiona Hunter singing ‘Blackbird’ accompanied by a harmonious men’s choir created a haunting delicacy around MacAskill’s wheelies and bunnyhops. Sweeping strings and a glorious heart-vibrating brass section were the necessary multipliers to the greatly expanded traditional line-up of whistle, pipe and drums sections which carried Bennett’s music across the cavernous auditorium and up to the furthest seats perched high up in the gods. 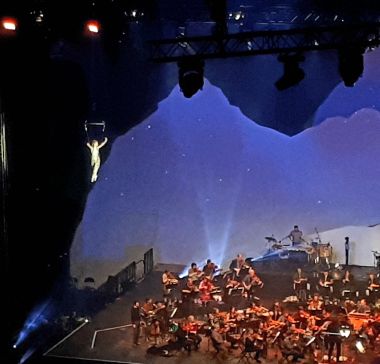 With Aisling ni Cheallaigh’s extraordinary aerial ballet and interwoven spoken word performances from David Hayman and Innes Watson (vocals + diddling), Lawson carefully wrapped Bennett’s ethics of connection around his Scottish, gamelan-tinged, Arabic and Indian infusions.  Could this curious Scottish orchestral admixture be the long-lost love bairn of the influential 9-piece Cauld Blast Orchestra  whose innovative and eclectic mix of Scottish folk, jazz and classical traditions blew through a startled Scottish music scene in the 1990s?    While the vast scale and physical remove of Bothy Culture and Beyond from its cultural roots and its audience may irk the critics and defy the copycats, a Scottish techno-circus for the 21st century may have been born.