November 25 marks the UN’s International Day for the Elimination of Violence against Women and signals the start of the annual 16 Days of Activism against Gender Violence ending on 10 December, Human Rights Day. This year the global campaign, which began in 1981, highlights the links between gender-based violence and militarism. 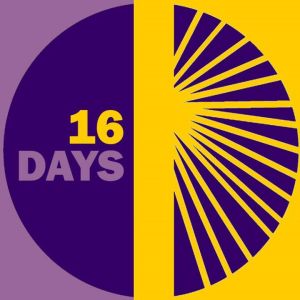 As its slogan ‘From Peace in the Home to Peace in the World: Let’s Challenge Militarism and End Gender-Based Violence! ‘ shows, violence in everyday life and violence in war are two sides of the same coin. In a year which marks the centenary of the outbreak of   World War 1 this is apt.

The colour white is internationally recognised as the colour of peace. During the run up to this year’s remembrance ceremonies some people wore white poppies. The white poppy was first worn in 1933 by the Women’s Co-operative Guild movement who demonstrate their remembrance by pledging themselves to peace. Some wore only white poppies, others wore both white and red poppies.

In 1991 the 16 Days Campaign joined with the White Ribbon Campaign, first launched by a group of Canadian men, in adopting the white ribbon as a symbol of hope for a world where women and girls can live free from the fear and threat of sexual and intimate partner violence. The campaigns challenge the acceptability of all forms of violence against women – and show us that women and men can work together to help break the silence surrounding these forms of violence. While violence against women mainly targets women, children, young people and men are also affected.

Domestic abuse, rape and sexual assault are too common in Scotland and across the world. Police Scotland recently reported an 81% increase in reports of domestic rape, a 55% rise in reports of domestic stalking offences and 58,976 domestic abuse incidents last year – most victims were women. Police Scotland have just announced details of their annual festive campaign against domestic abuse and in June, the Scottish Government confirmed their continued commitment to the prevention and elimination of violence against women. The scale and nature of systematic child sexual exploitation Rotherham revealed in a recent report written by Alexis Jay, former Director of Social Work at West Dunbartonshire Council, has caused widespread concern. The Scottish Government recently launched its own national child sexual abuse strategy amid warnings that the problem here is likely to be widespread.

The links between inter-personal, intimate partner and international war and violence are clear. Scottish Women’s Aid, Zero Tolerance and White Ribbon Scotland will join campaigning groups and women’s activists on 25 November in marking the 16 Days across the country. Wear white for world peace, wear a white ribbon for an end to violence against women.