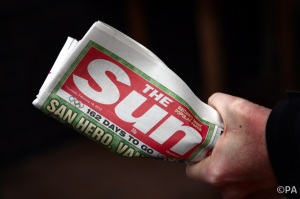 The contortions of The Sun newspaper against mounting opposition to its notorious Page 3 topless women would be laughable if they did not represent a much wider problem. With even glamour queen Katie Price apparently throwing in the towel and having her breast size reduced, you wonder how many senior Sun executives seriously want to keep it going. Even they can’t have entirely missed the dawning of the new millennium and 40 years of advances in women’s equality.

Page 3 dates from a time when Benny Hill, Les Dawson and Jimmy Savile were the acceptable faces of a male-dominated culture where women just needed just to “calm down dear” and take a joke. As the No More Page 3 campaigners say, this isn’t just about getting rid of a sexist image in a newspaper. This is part of women’s “wider struggle for better representation, equality and human rights”.

British society is slowly wakening up to pervasive everyday sexism, rape culture, the normalisation of pornography and epidemic proportions of sexual exploitation, gender-based violence and sexual abuse – both here and across the world. Post-Leveson, how long can fair and balanced journalism co-exist with the continued stereotyping and objectification of women? You don’t have look far beyond Page 3 to see the Ched Evans row, the Grand Theft Auto Rape Mod, the Fairlife milk adverts and countless more.

The wider picture? It certainly won’t help that this is a country that was recently described by a senior UN official as having an “in your face sexist culture”. Fewer than one quarter of reporters on national dailies are women. Research has shown that men outnumber women as television and radio experts by four to one. The TV industry’s unwillingness to put older women in front of the cameras is meanwhile legend.

Yet if this is the mountain still to climb, we are arguably at a slightly higher altitude than we once were. Part of this is changing times – The Sun’s management at least sounds awkward defending Page 3 these days, and it ditched the page in Ireland with little effect to circulation. Its UK days also look numbered.

The atmosphere has also arguably been changed by the slew of sexual abuse scandals that have hit the media in the last two or three years. Operation Yewtree, Rotherham, Rochdale and the Westminster affair have all created a sense in which practices that used to be tolerated are now being confronted. The media has been shamed by its own past acquiescence and has not shied away from full coverage that gives the impact on the victims its proper due.

So how do we make these steps forward permanent? Unrelenting campaigns from No More Page 3 to Everyday Sexism are obviously part of the answer. Scotland might also have something to offer here, through the work of anti-abuse charity Zero Tolerance. In 2013 it launched the first Write to End Violence Against Women Awards and published a media guide to promote responsible journalism and reporting of all forms of violence against women. The group also awards an annual wooden spoon for the worst examples of sexist reporting. The 2014 award winners will be announced on the evening of 10 December.

It is a reminder that we could do with a high-profile version of these awards for the whole of the UK. If we can give large amounts of coverage to Bad Sex Awards in writing, we need exactly the same approach for writing that degrades women. To give others a chance of course, Page 3 would need a category all of its own.